RECOMMENDATION > Remember This: The Lesson of Jan Karski 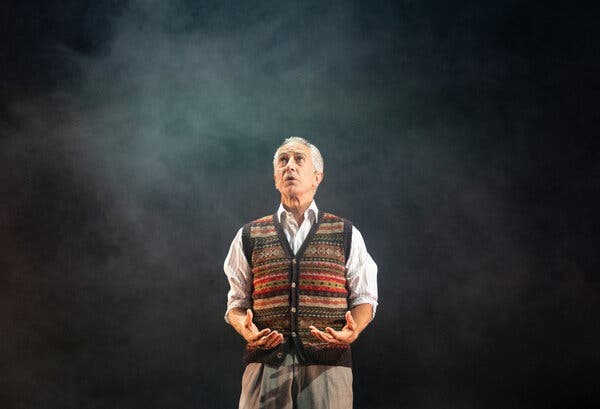 I saw this film at the Massachusetts Fine Arts studio and was captivated from the very beginning. If this film is in a theater near you, I highly recommend that you go. My hope is that this film becomes available to every venue in America during the coming year.

Remember This’ Review: Finding Strength Amid Moral Failure
David Strathairn is remarkable in a solo show about Jan Karski, who was profoundly changed by what he witnessed during World War II.
By Alexis Soloski

There are catastrophes so terrible that the mind struggles to comprehend them. Here is Jan Karski’s description of his visit in 1942 to a Jewish ghetto in Warsaw, during which he saw dead bodies lining the streets and starving women nursing their babies from sunken breasts: “This is not a world,” he observed. “It is not humanity.” But this was humanity. And Karski, an agent of the Polish government in exile during World War II, was tasked with reporting it.

Theater for a New Audience’s “Remember This: The Lesson of Jan Karski,” originally produced by the Laboratory for Global Performance and Politics at Georgetown University, is a dignified and affecting solo show. Starring a masterly David Strathairn, and adapted from Karski’s own words by Clark Young and Derek Goldman, it brings Karski’s recollections to anguished life. With limited instruments — lights, sound, a table, two chairs, a single suit —the play evokes not only the contours of Karski’s own eventful biography, but also the horrors and privations of the war, with a particular emphasis on the failure of Allied governments to acknowledge and intervene in the murder of Europe’s Jews.

A Catholic diplomat recruited by the Polish underground, Karski reported on the changes the Nazis had wrought, entering first the ghetto, and then a transport camp. “I become a tape recorder. A camera,” Strathairn’s Karski says. Later, he elaborates: “I understand my mission. I am not supposed to have any feelings. I am a camera.”

The forerunners to “Remember This” are not necessarily or essentially theatrical. (Though Victor Klemperer’s “I Will Bear Witness,” which played Classic Stage Company two decades ago, is a kind of antecedent.) The more significant influence seems to be documentary film. Karski was featured in two documentaries by Claude Lanzmann, “Shoah” (1985) and “The Karski Report” (2010), though Goldman, the laboratory’s artistic director and the director here, also drew on other documents, including Karski’s 1944 memoir and a 1994 biography. Here there is frequent underscoring — the sound design and original compositions are by Roc Lee — which gives the show a cinematic feel, emphasized by Zach Blane’s evocative lighting.

Whatever its form, “Remember This” serves as a remarkable showcase for Strathairn, who moves fluidly among characters and time periods. He leaps onto a table at one point and off it at others. Throughout, he manages to communicate both Karski’s extraordinary moral strength and his passionate reactions to what he sees. Because Karski has feelings. He is, as Strathairn depicts him, much more than a camera or a stylus — he is a man profoundly changed by what he witnesses.

Strathairn delivers an expert performance, but it is also an unshowy one, never calling attention to itself at the expense of the content. This restraint renders “Remember This” perhaps most affecting and effective in the tension between the coolness and expertise of its form and the hot horror of its subject. It is in the space between these poles that the particular evil of the Holocaust is conveyed and understood, that unimaginable suffering is imagined. Allied leaders — Franklin D. Roosevelt, Anthony Eden — wouldn’t be convinced of the truth, despite Karski’s efforts. But we in the audience are, which grants us a squirmy moral superiority, even as the show asks us, gently, to examine what we are doing in our own lives to oppose hate.

Karski, who became a celebrated professor at Georgetown and received, posthumously, the Presidential Medal of Freedom, died in 2000, which means that he lived long enough to see Holocaust minimization and outright denial come back into vogue. But this doesn’t seem to have worried him. “These voices are weak,” he says in the play. “They have no future. As I tell my students, we have a future because we are speaking the truth.”

But truth seems to have become an increasingly fungible concept. Faced with our current culture of misinformation, disinformation and propaganda, I wonder what particular advice Karski might have for us now. How would he have recorded this?