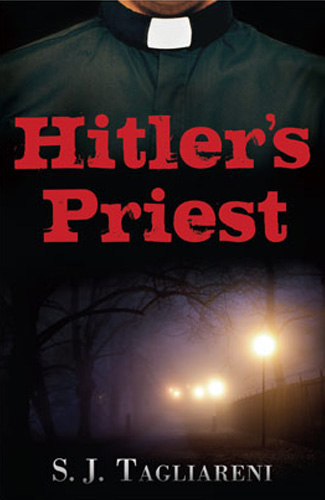 Hans Keller was always highly intelligent—so much so that he learned to place little value in what the school or church tries to teach him. But after a chance meeting with the charismatic Josef Goebbels, a leader of the burgeoning Nazi Party, atheistic Hans is offered a key role in shaping the future of the new Germany: providing essential influence within the Catholic Church.

As the nation prepares for war, Hans finds himself gaining power in a shadowy world of manipulation and deceit. He soon rises to a level of ultimate status—and ultimate compromise—as Hitler’s personal priest. In this original thriller full of fascinating period detail, author and former priest S. J. Tagliareni offers a rare window into the psychological and moral conflicts raised by Nazi Germany and the Holocaust.

Hitler’s Priest will provide the reader with an understanding of

“I could not stop reading this novel. Do not start reading this novel if you have work the next day. It was clear and concise. The Third Reich’s attempt to infiltrate the Vatican is a benchmark for a historical Judeo Christian movie.”

“I just finished the first chapter, and Wow, this is good writing! It sweeps you up and into this (fictional?) world. I love to read a good book by immersing myself in a character I can root for. The title of the book told me there is a fascinating tale to be told here, but I didn’t think I would already care about Stefano and Severio. I can’t wait to find out what happens next, but had to check in with a review because settling in with a good book is a lifetime joy you avid readers out there will understand. The weekend is here, so start reading!”

“The book, through its cast of characters, portrays in very personal and human terms the the horror of the Nazi era. We learn the myriad ways people got sucked into the maelstrom. The characters are like the threads of a magnificent, but alarming tapestry that rivets your attention. It is frightening to learn how destructive a radical ideology can be. Human beings are capable of great acts of courage, compassion, and unfortunately manical evil. This book vividly and realistically portrays both.”

“When one is drawn closer to evil, at what point do you react and try to pull away? Hitler’s Priest is a novel that delves into the nature of humanity when faced with the evil of the Holocaust. S. J. Tagliareni, an ex-Catholic priest, provides a different perspective on the Catholic involvement in the Holocaust. Hitler’s Priest is riveting and very hard to put down, highly recommended.”

”Hitler’s Priest, a captivating novel, offers its readers more than an eyeopening and potent story: this book contains profound observations and unforgettable life lessons. Thank you, S. J. Tagliareni, for giving us this important novel.”