20% of all profits go to St. Judes Children’s Research Hospital 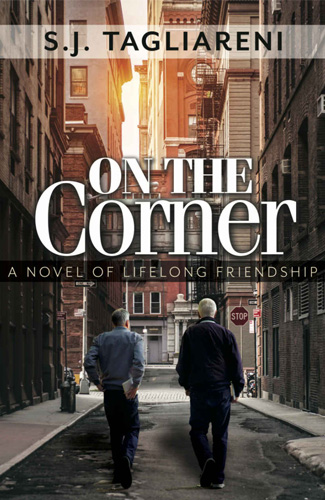 A Novel of Lifelong Friendship

This is a novel about ordinary men who lived extraordinary lives, confronted by social transformation in a convulsive moment in American history, navigating personal tragedy and claiming different visions of service, success and faith. Their friendship challenges each of them to lighten up, truth up, and man up to face their fears, healing old wounds and reviving their dreams. With humorous insight into men’s friendships and feelings, this story speaks to today’s political and social divide, proving that no matter how stuck we might seem, we can change and grow at any age.

Sal and Michael are best friends growing up in Jersey City in the 1950s, attending the same school and church. When tragedy strikes repeatedly, their bond is strengthened. One become a priest; one a surgeon. Their complicated lives take them in different directions, but when they meet again sixty years later, the bond is still there and makes all the difference. This novel explores faith, family, friendship, the meaning of work and service, and the enduring importance of where we come from. On the Corner will make you laugh, cry—and reach out to others. Both friends take inspiration from and measure themselves against The New Testament and Viktor Frankl’s classic Man’s Search for Meaning. At its core, this novel has the same message: what matters is love.

A novel recounts six decades in the lives of two lifelong friends.

Author, motivational speaker, and former Catholic priest Tagliareni (The Cross or the Swastika, 2014, etc.) blends his own memories with fiction in this sparkling, inspirational novel about Michael McNally and Sal La Greca, who first meet in a New Jersey grade school in 1954. When plucky Sal rescues scrawny Michael from menacing seventh-grade bullies, the two boys forge a bond. The two are different in several ways; black-haired, olive-skinned Michael adheres to his Catholic faith, while blond, blue-eyed, light-skinned Sal is staunchly secular. Still, their friendship deepens and endures throughout their adolescence, and their connection is strengthened by their “abiding respect and trust” for each other, particularly when Sal acts as a pallbearer at Michael’s mother’s funeral. With pleasant assuredness and narrative dexterity, Tagliareni effortlessly builds out his central characters’ profiles through their college years as Michael sacrifices a Notre Dame scholarship to raise his two brothers and Sal embraces the expansive, urban diversity of life at New York University. As the years pass, however, the men’s lives go in very different directions. Michael gets married, loses a brother in a tragic accident, and embarks on a medical career. Sal, after much introspection, surprisingly forges ahead with an intention to enter the priesthood; the author convincingly handles this latter plot development with authenticity, as it’s drawn from Tagliareni’s own experiences as a member of the clergy. As adults, both men are successful, productive members of society and are resilient against the slings and arrows of an unjust, unpredictable world.

The author proves to be masterful at filling the two main narratives with life-changing events, both good and bad, which will keep the reader in a constant state of anticipation for Michael and Sal’s inevitable reunion. Indeed, another tragedy brings them together again, and both men are grateful to have the opportunity to catch up. At the same time, the author shows how each character recognizes how far their destinies have diverged. Michael assists wounded Marines in Vietnam before returning home to his family in New York and finding out the truth about his son’s sexual orientation; Sal moves up the ranks of the Catholic hierarchy, but the wisdom of an Austrian doctor drastically alters the course of his life. Throughout the story, Tagliareni draws extensively on his own life experiences, as well as those of his friends, which gives the novel an air of verisimilitude. It’s consistently satisfying, even enchanting at times, even though, for the two main players, the sheer amount of tragedy tends to outweigh the joy. Michael and Sal are immensely memorable characters, and their personalities will make readers care about them instantly. As a result, these kindhearted men are easily able to carry the novel through to its bittersweet conclusion. At its core, this is a life-affirming story that models the most soulful aspects of love and companionship.

An uplifting and often engrossing testament to the power of enduring friendship through the decades.

“ON THE CORNER captivates as it captures a galvanizing era of history through the eyes of two star-crossed friends who come to treasure the value their everlasting friendship. A recommended compelling read.”

“I love how their story begins together and ends that way. There was so much heartbreak along the way reminding us why faith is essential in life.”

“Not only does the author share his beautiful story of a special lifelong friendship; but writes about family relationships and life lessons that will captivate you and allow you to laugh and cry. I finished this book in one day; I needed to know what happened next! An excellent summer read that I will share with my friends!”

“I love a book that stirs my emotions, and On the Corner surely did with characters I immediately related to and cared about. What a roller coaster ride just like real life with belly laugh moments, gut -wrenching losses, and so many life lessons about friendship, family and what’s really important. Great book!”

“This book takes you on an intimate journey with two very passionate men. You go through their childhood together and then the journey takes you into their loves, goals, losses and triumphs. It’s raw at times. It made me cry and laugh and think about my own relationship with God and church and how I was brought up. Don’t miss this book.”