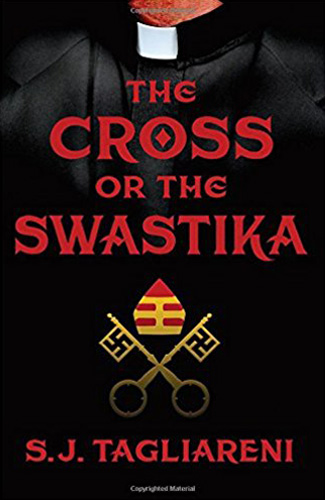 The Cross or the Swastika

In this novel by the author of Hitler’s Priest, follow along as a diverse and wide-ranging cast of characters journey through the events of World War II and the Holocaust. Broad in scope and thematic undertakings, settings range from the eternal city of Rome to a prison cell in London, from Denmark to the Russian front. Go inside the secret conversations of the Nazi inner circle, as Hitler and Goebbels enact their plans for European domination and the extermination of people of the Jewish faith.

Follow decision-makers within the Vatican who must choose what course of action the Catholic Church will take as the Nazi cloud descends over Europe. Will they become involved in the politics of the day, going against the tradition of the church, or will they remain neutral and silent, not speaking out against horrific atrocities? Dr. Miriam Cohen attempts to set herself apart from the psychological leaders of her time, and then must attempt to sustain the meaning in her life as she finds herself in Auschwitz, separated from her loved ones. Ambassador Karl Hunsecker must deal with his guilt as he tries to serve the country he loves while not abandoning his ethics, and his wife Solange makes a choice of conscience that will have a momentous impact on herself and her family.

Meet many others from all walks of life who offer unique insight on what it must have been like for people from all perspectives to live through the second World War. An exploration of the role of the church, the depths of human depravity, and the inner strength needed to sustain individuals in times of deep crises, this novel ultimately asks: What would you have chosen?

“S. J. Tagliareni is masterful in his story-telling. The Cross or the Swastika weaves a story of the choices people were faced with during the Holocaust. It leaves the reader with a clearer understanding of that horrific time in the world’s history and the people who were so effected by it. It is a compelling book that is hard to put down once you begin reading.”

“This book is an amazing discussion of personal choice, and the loss of clear thinking due to propaganda, abuse of power and fear. Read this not only as a piece of history but as a reflection that is very current given today’s headlines.”

“If you have read Hitler’s Priest, you must read the Cross or the Swastika! An engaging follow up, it will grip you from the first and bring to life the drama of the period. A wonderful read from S.J. Tagliareni.”

“Tagliareni’s The Cross of the Swastika is engrossing. The author immerses the reader in the daily lives of ordinary folks, sharing their deepest values and hopes. When their hopes are destroyed, the author tries to help the reader understand the thinking of Nazi officers and leaders of the Catholic church. The writer brings the horror of the Nazis’ actions to the reader. The reader wishes for different outcomes. A passionate book, a must read.”

“I am deeply moved by how the author continued the story including the horrors of the Nazis interwoven with the personal stories
of courage, resiliency through finding meaning, and some insights into how toxic shame is part of what
happens when humans become monsters.”